Kita-Harima in Hyogo is where Japan's original landscape remains. Your experience here will enrich your heart. 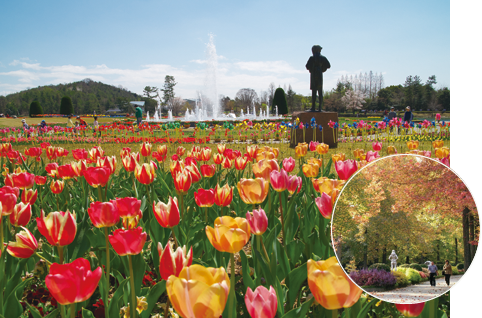 In spring, the flowerbeds in the park are filled with colorful tulips; in autumn, the largest chrysanthemum exhibition in the prefecture is held. In addition, beautiful flowers from tropical and subtropical regions bloom in the large greenhouse full of tropical atmosphere. In particular, the greenhouse offers one of Japan's largest collections of tuberous begonia, Streptocarpus, and insectivorous plants. In the restaurant, visitors can enjoy a meal over the view of the flowerbeds filled with brilliant colors throughout all four seasons. 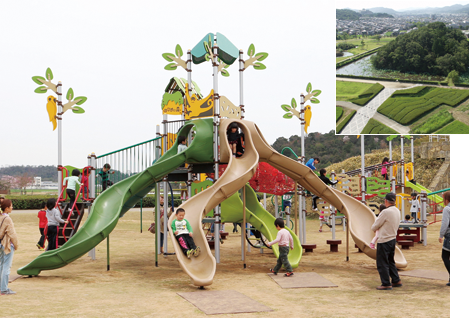 A park where you can experience the 1,300-year history since Harima-no-kuni Fudoki

Tamaoka burial mound in the park, built in the early 5th century, was the location of the Nehime Story described in Harima-no-kuni Fudoki (a historical description of the culture, climate, etc., of southwest Hyogo). Including this, and the relocated and restored Aizen burial mound, there are seven mounds remaining in the park. The shapes of the remaining burial mounds vary: key-hole shaped mounds, scallop-shaped mounds and round mounds, and some include tombs with a horizontal stone chamber. In addition, the large park of 6.2 hectares has a grass field, an ancient farm, a wetland observation garden, a birdwatching deck, a nature observation park, and the children's playground Nehime-no-Mori (Nehime forest). 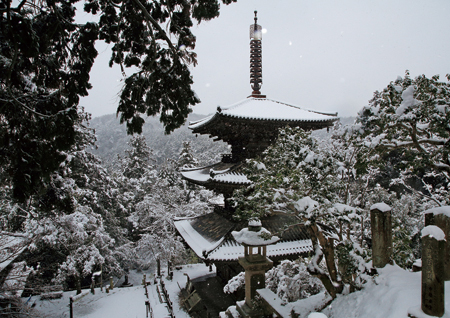 The famous temple of the Tendai sect was founded in 650 by the high priest, Hermit Hodo from India. The temple is the 26th temple of the Saigoku 33 Kannon Pilgrimage. It houses first-class cultural properties of Hyogo, such as the three-storied pagoda (the oldest pagoda in Hyogo which is designated as a national treasure). The temple attracts many visitors in spring when cherry blossoms bloom, and in autumn when the leaves 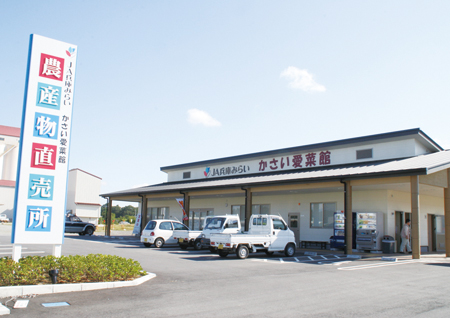 A wide variety of specialty foods of Kasai

At Kasai Aisaikan, which is directly run by JA Hyogo-mirai, specialty foods filled with the passion of the locals are prepared. For the satisfaction of the customer, the facility sells vegetables, flowers and processed foods made with care and attention.

Within the grounds of the Rakan-ji Temple are aligned four hundred and several dozens of rectangular cuboid stone Buddha figures with a head and face carved into them. These stone Buddha figures "speak" to you with the various expressions of a smile, a sad face, and gentleness. It is said that when, by whom, and for what purpose these figures were created remains a mystery. The Sento-e (memorial service with many candles) is held every year on August 8. 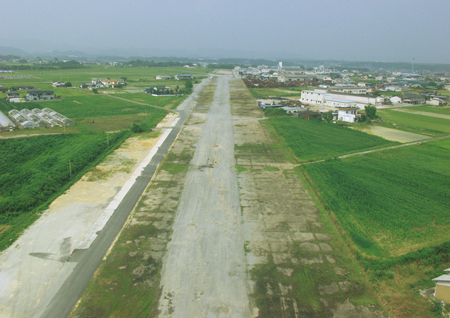 Remains of the war to be passed down to future generations

The airfield of the former Himeji Naval Air Corps opened in October 1943. Even on a national scale, an airfield of this kind remaining is extremely rare. Around the airfield site, visitors can see bomb shelters, bomb warehouses, and machine gun placements that vividly reflect the times of the war.

▲ Top of This Page

Service is available only in Japanese.

We will guide you through the history and culture of the region. Please do not hesitate to apply.